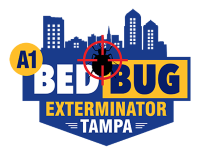 The bee might be a common pest during those relentless Tampa summers. However, most citizens don’t know that there are several different species in the area. You might be familiar with the bumblebee or the wasp, but have you ever heard of the carpenter bee? It could perhaps stand to be your most formidable challenge yet. The carpenter bee is, a solitary species and by far the largest.. A single bee can grow to be anywhere from ½ to 1 ½ inch. The males of the species are typically black and orange, while the females are solid black.

It is not uncommon for residents to confuse this species with the bumblebee, but it is the hairy abdomen that sets the two apart. If you can get close enough, you’ll notice that the carpenter bees boast a much hairier stomach. It is also dark black with a somewhat shiner appearance. Either way, you’ll need to know which specific species you are dealing with, so you’ll know how to proceed with the elimination.

With the name of this particular species, you’d think they’d be all about wood and wood structures. Unfortunately, this is not exactly the case. This species doesn’t rely on wood for nutrition. They only chew into dead or decaying wood to burrow hole that will later be used for shelter, protection, and rearing young. This species could be considered proficient burrowers, with their powerful mandibles, giving them the ability to make quick work of wood.

It is not uncommon to also find them enjoying weathered, unpainted wood around the property. Redwood, cedar, cypress, and pine are amongst some of the specie’s favorites. The best way to deter this species from the property is by staining or painting weathered or decaying wood. It’ll take a few days for one of these flyers to produce a ½ diameter hole, but this will be just big enough for the bee to squeeze into and store their eggs.

The Species Doesn’t Serve A Queen

Given that the carpenter bee is a solitary flyer, it does not serve a queen. Unlike other species, they don’t live in large colonies. This bee doesn’t follow a hierarchy where specific members are appointed to specific tasks within the community. Most adults like to live a lonesome and solitary lifestyle, but the females can share a nest. This species is also sometimes referred to as overwintering pests, as they like to ride out the winters.

The female of the species is considered the engineers, as they are responsible for most of the burrowing into the wood structures. However, it is the males that are extremely aggressive and territorial. Interestingly enough, they don’t possess stingers, which leaves them all bark with no bite. They’ll fly around their nests, getting near pets and people that come within close range, but don’t possess the ability to sting.

That doesn’t mean they won’t attack because they can and will dive-bomb your head and harass you as they buzz around the front of your face like a common housefly. 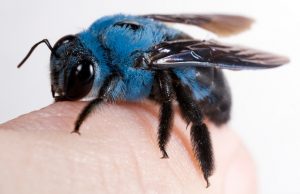